Jo and Lawrence have been married for thirty seven years. It’s a strong marriage, the envy of all their friends. But as Lawrence, a star history professor at a London university, approaches retirement, he seems edgy and restless. Jo puts it down to worry about leaving the college he’s worked at for 28 years.
They return from Lawrence’s retirement party late one hot June night. She goes out to sit in the garden while he gets them both a glass of water. When he joins her again, he drops his bombshell. A bombshell which makes Jo re-think all of their years together.
The story follows Jo as she deals with the traumatic fallout of Lawrence’s revelation, including coping with her two children’s shock, financial issues and rebuilding her life.
This book asks the question: Can we ever really know someone? Even after decades of a successful marriage, can anyone ever be truly certain what is going on in another person’s head? And can Jo’s marriage survive such a shock? 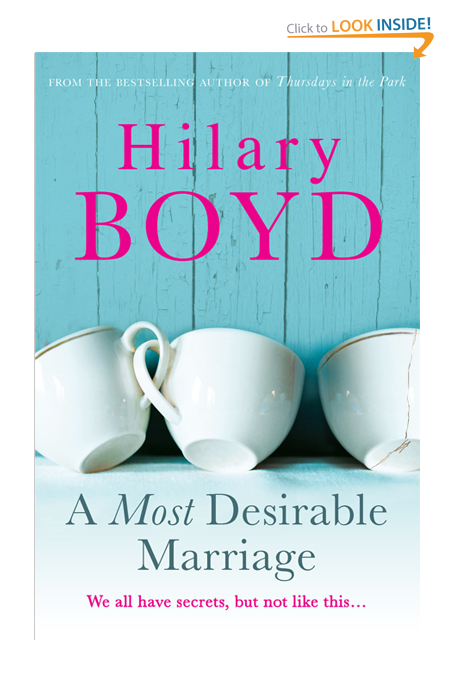 I loved the fact that the central character is a strong, older woman. She does have her moments when she just wants to lock herself away from the world, but generally I found myself wanting to cheer her on as she chooses to get on with her life. I always think that it is important to care for the characters that you read about and I really did in this book which is probably why I felt so involved.

Hilary Boyd has an easy style of writing and the subject matter is very contemporary. Having read other books from this author, A Most Desirable Marriage definitely heads my list. It’s a most desirable read.”